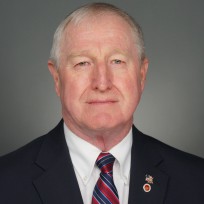 Q: What makes Transylvania County so special to you?
As a native of Transylvania County this is home to me and my family, I raised my three children here, it is very safe, clean and friendly community with citizens always willing to help each other when needed. It is a community that offers many cultural, recreational and educational opportunities for our citizens. Also it is a place where most people get along well with their neighbors and can enjoy the peace and comfort of a small community.

Q: In which ways do you hope to improve Transylvania County?
As a Commissioner it is always important to try to balance the need for growth and economic development while maintaining our small town appeal. Our natural beauty and environment provide opportunities for increased tourism, appeal for small businesses to locate here and also attraction for people who work from home and eventually retire here.