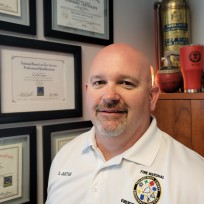 He joined the fire service in 1993 and is a 1996 graduate of East Henderson High School and has continued his education and pursued his interest in fire and rescue through studies with the NC Office of State Fire Marshal gaining his Level III Fire Code Inspector and Certified Fire Investigator. In 2015, Scott graduated with an Associates in Fire Protection Technology from Blue Ridge Community College, and in 2019 received his bachelor's degree in Emergency Management at Waldorf University in Forest City, Iowa.